“His cadence encapsulates both creation and destruction in their endless exchange and balance…
O teach me how to work and keep me kind.”
Stanley Kunitz

During the first weeks of grieving, I read two books of poetry obsessively, one being Stephen Cramer’s Shiva’s Drum. Shiva is a Hindu deity whose attributes include opposing themes: the benefactor and the destroyer. This duality within the single entity was something I recognized both in myself and in the universe. Shiva has my respect for containing and reflecting such a natural truth. Shiva is also commonly referred to as “The Cosmic Dancer.” In this depiction, Shiva performs his divine dance to destroy a weary universe and make preparations for creation. Another duality: creation cannot exist without destruction. When I think of this concept, I feel an embrace from Shiva that lifts me to dance upon the ruins.

Not far from Shiva sat the second figure, Shiva’s daughter, Ganesha. Ganesha is worshipped as the remover of obstacles (and, traditionally, also as one who places obstacles in the path of those who need the lesson). There is an interwoven relationship in Shiva and Ganesha’s attributes, so it’s no surprise that the two are related. Shiva destroys; Ganesha removes the obstacle through the granted wisdom of overcoming, which paves the way for creation.

The words from the opening quote of Shiva’s Drum kept replaying in my head…O teach me how to work and keep me kind. As I reached the end of the gallery, I looked back once more at Shiva and Ganesha. “Destroy, Overcome, Create,” they answered.

One of these two would grow up to be the shadowy archer in yesterday’s photo.

Today is Auguste Rodin’s 173rd birthday. Rodin felt as though many of his works, particularly his marble pieces, were already hidden inside each chunk of stone and that his purpose was to “uncover” or “find” them. As a photographer the world is like my chunk of rock, and I use the camera to pull things and people into focus that were hidden there all along. 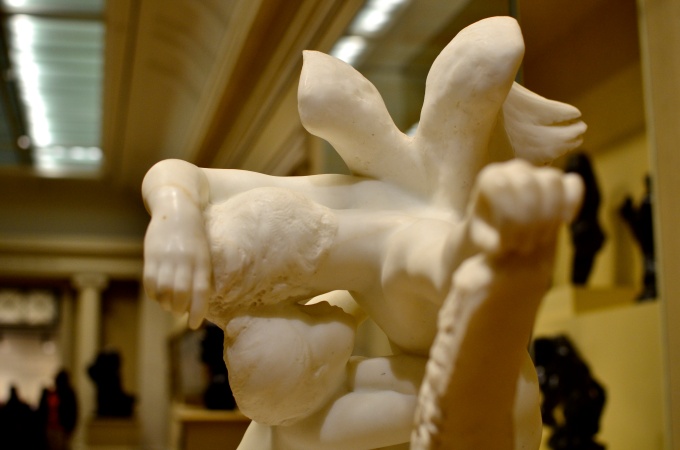